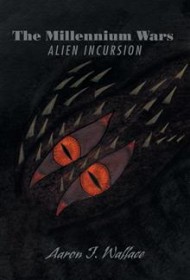 Set in the wake of a third world war, The Millennium Wars: Alien Incursion, is a science fiction action battle epic. On one side is the Cadre of Reckoning, an underground terrorist organization — fronted by the superhuman Long Shen — that claims to be Earth’s first society. On the other is the Sinjo League, a secret military charged with protecting humanity (read: the good guys).

Our hero is Colonel Daniel Cross, a cybernetically enhanced soldier whose identity was purged to make him the ultimate Sinjo weapon. But the Cadre have their own weapons, including Calabro, whose mysterious abilities exceed even Cross’s, and a violent force of alien invaders dubbed the Quelldrowa, summoned and controlled by Shen himself. Add to that, troubling pre-war memories that have re-surfaced for Cross, and the sudden arrival of yet another alien force, traditional enemies of the Quelldrowa, and Earth’s uncertain fate promises to manifest in the ultimate showdown.

Confusingly, Cross’s narration extends beyond himself and into omniscience, recounting Long Shen’s conversations from halfway across the world. And while the action is constant in The Millennium Wars, it’s a little cartoonish, complete with comic book sound effects (“pow pow crackle!”) and stereotypical villains (Long Shen is a bit like GI Joe’s Cobra Commander). When Cross is hurt, he gets to recharge and heal, upgrading new powers as if he’s leveling up in a roleplay game. (In fact, that’s a good analogy of the pacing and structure of Millennium Wars.)

However, none of these qualities necessarily detract from a story that is faithfully reminiscent of military science fiction of the ‘80s and ‘90s (e.g Robotech, Starship Troopers, Aliens, and all of their imitators). Readers shouldn’t expect deep character development or romance. But with that understanding, if high-octane action is what you’re after, then The Millennium Wars more than delivers.