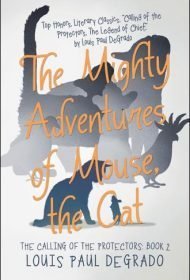 Second in Louis Paul DeGrado’s middle-grade series, The Calling of the Protectors highlights a young cat’s courage as she aims to save animals trapped in a shelter.

Despite her youth and small size, Mouse is a brave cat and daughter of a Protector. The Protectors are cats of a special lineage whose responsibility is to protect humans from evil. Mouse organizes an ambitious mission to rescue two friends from a shelter whose owners are cruel to the animals.

Scratch and Dazzle are set free, but Mouse worries about those they left behind. She arranges to rescue the other animals. But this time the mission’s outcome is even more uncertain, as the journey to the country, which will be the freed animals’ destination, is full of dangers, from ferocious wild dogs to bloodthirsty raptors. As the story unfolds, readers witness Mouse’s insightful leadership and the team’s courageous acts.

The story offers an intriguing group of eccentric characters. In the first mission, three cats, ten pigeons, a mouse, a rat and a sulphur-crested cockatoo team up to rescue Scratch and Dazzle. Colonel Wellington, leader of The Pigeon Brigade, is hesitant to help cats, but his reluctance is overtaken by his love for adventure. Streets, a shabby, lanky rat is an expert on everything going on around town.

Song lyrics, sometimes sung by characters playing guitar and dancing, add excitement and help tell the story or instill lessons. For example, while trying to persuade caged animals to break free, Mouse sings “Don’t give up too easily/ The mighty brave come through/ Win or lose/ It’s up to you.”

The story is mainly told through dialogue, creating emotionally impactful moments, such as when Midnight, the cat guiding the group to the country, reveals to Mouse how he left home after discovering his father was not who Midnight thought he was.

In all, readers will savor this delightful middle-grade story full of thrilling adventures that impart valuable lessons.