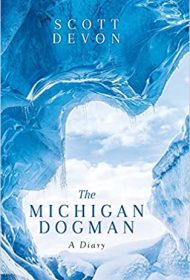 In this diary-style novel, a half man/half dog chronicles his life as an “imperfect monster” forced to live in secrecy.

The story begins as the hybrid creature known as the Michigan Dogman introduces himself. He’s about 8 feet tall, 500 pounds, with hair covering his face and body, information he’s gathered from people who’ve reported seeing him. Much like a canine, he lives largely off roadkill and has been said to have a “fearsome howl that sounded like a piercing human screaming.” He lives in caves in Michigan’s northwest Upper Peninsula, hibernating during winter.

But the Dogman has a human’s intellect and is an avid reader. He’s knowledgeable about numerous subjects, including literature and music. He’s lonely and saddened by society’s rejection, knowing that to be seen publicly could cost him his life. But the Dogman is also philosophical, questioning if everyone feels like Frankenstein’s monster at times.

Hungry for education and friendship, he takes to hiding in the bushes, where he listens to the widowed music professor Dr. Jamesman play the piano. Hoping to make a friend—he has come to trust that the professor won’t judge him—he leaves a letter in Jamesman’s mailbox. As the story unfolds, the Dogman finds his dearest wishes coming true and, being treated as a human, he evolves as one, too.

While this story can sometimes seem overly sentimental, it also comes across as a realistic depiction of the pain and loneliness society’s outcasts experience. The plot is fairly thin initially, and the narrative voice can grow monotonous, but it’s bolstered by the author’s knowledge of literature, music and Michigan. The Dogman mentions his love of author Jim Harrison’s works, finds in Beethoven a kindred lonely spirit, and riffs on Michigan trivia.

The “imperfect monster,” is no monster, but a relatable individual seeking basic emotional comforts. Despite the novel’s flaws, the Dogman’s story offers rewards for those seeking the compassion and cultural references it delivers.