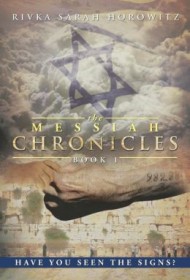 In The Messiah Chronicles, Rivka Sarah Horowitz has fashioned a novel that combines a serious look at a religious issue with a simmering romance.

Arielle, a young, Jewish woman from America, is studying at Jerusalem’s Hebrew University in 1987. She sees a sign on a lamppost stating that the Messiah is coming to Zion Square on a particular day in July. The coming of the Messiah (the Moshiach) is a long-awaited event in Judaism because it will herald a new era of peace.

Arielle finds few people interested in the event and decides to attend alone. As she waits, she is introduced to a young, handsome Chassidic Jew named Aryeh, who joins her in passing out flyers. It soon becomes apparent that Arielle is drawn to Aryeh. That comes with its own set of problems. Arielle is less observant than the strictly observant Aryeh, who has never been on a date that wasn’t arranged strictly as a prelude to marriage.

It helps to have a working knowledge of Judaism to read Horowitz’s book. Horowitz is a skilled writer and includes a glossary, but it’s easy to become bogged down in terms such as “siddur” (prayerbook) or “simcha” (a joyous occasion). To further complicate matters, Horowitz uses three narrators — Arielle, David (whose uncle is the alleged Moshiach), and Miri, David’s wife — to tell their piece of the story, alternating between 1987 and 1994. While it’s not difficult to follow and gives Horowitz more latitude to explore David’s uncle and the ripple effect that would occur if he really is the Moshiach, it’s still one more layer for readers to unravel.

Nevertheless, for those interested in the topic, the novel provides thought-provoking questions about the coming of the Messiah in the modern era: Will people recognize him; in what manner will he appear? Will people accept him and change their lives accordingly? And for readers interested in less weighty matters, there’s always a good, old-fashioned will-they-or-won’t-they romance to see them through.