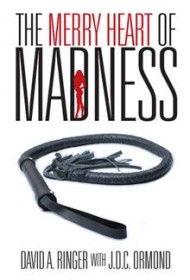 In The Merry Heart of Madness, David A. Ringer and J.D.C. Ormond deliver an enticing and sexually charged thrill ride in which lust and violence reign supreme.

Dr. Charles Douglas, tenured botany professor of Miami University of Ohio, has a diseased heart that is quickly failing. Seeking a cure that he has not yet found in conventional modern medicine, Dr. Douglas journeys to a remote Himalayan region and the assistance of a reclusive botanist that can provide him a cure.

While he doesn’t gain the cure he desires, a psychotropic drug unlocks a surprising, sexual, and violent part of the good professor’s psyche. Meanwhile, his heart disease is not initially healed, but this problem is solved later in a shocking situation that draws him deeper in to a tangled underworld where Dr. Douglas and others are driven by a quest for money and power, and even twisted social justice.

A wide range of characters are vying for the upper-hand in the story, including a highly trained female spy, Chinese mercenaries, and a politician, along with Dr. Douglas and his cult-like group of followers, who are controlled by a violent game of dominance and submission and come with their own personal narratives. Each character ultimately has his/her own goal, and paths diverge and cross in unexpected ways. The plot as a whole is akin to a roller coaster ride in complete darkness; the reader can’t predict what is coming but the anticipation is intoxicating and highly enjoyable.