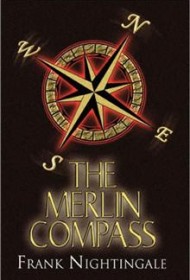 Frank Nightingale’s The Merlin Compass pays homage to 1930s America, where technology still seemed magical and the world was headed to war.

Our teenaged protagonist, Andy Justice, stumbles onto a Nazi conspiracy when David Spaulding, his beleaguered schoolteacher and former physicist, enlists him to hide a special compass that can lead its user to virtually anything he searches for. Spaulding and his wife disappear under suspicious circumstances and Andy, with the compass as his guide, winds up on an international adventure to rescue them. Along the way, he is joined by a motley cast of playboy pilots, wealthy entrepreneurs, career criminals, and war-weary expatriates.

The author’s enthusiasm for the era is infectious, captured on the page with loving (if sometimes overwrought) detail. The Merlin Compass isn’t lacking in adventure, either. But while there is plenty of fun to be had, sometimes the plot zooms along a bit too fast; often there is no clear demarcation between one character’s point of view and another, and the transitions between scenes can be equally choppy.

There is a lot of backstory obviously in play, particularly for Mr. Spaulding, but very little of it makes it into the narrative, causing a number of unanswered questions for readers. The syntax may cause additional confusion, with oddly punctuated sentences, including the author’s strange predilection for connecting commas and hyphens in improbable ways. Character dialogue has its own set of quirks, with heavy-handed use of dialect for German characters reminiscent of an episode of Hogan’s Heroes (similar stereotypical dialect techniques are used for African Americans).

The Merlin Compass is an interesting combination of young adult adventure, deco-punk science fiction, and World War II Americana. Unfortunately, the unique setting and approach is not quite enough to elevate the story above its sporadic plot and stereotyped characters.