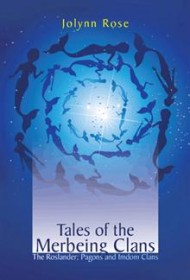 In the tradition of Jonathan Swift’s Gulliver’s Travels and Italo Calvino’s Invisible Cities, Jolynn Rose delivers an account of the culture and mores of a fictional populace, which she calls the “merbeings.” Rose illustrates the book with line drawings, though not enough that the work would fall into the illustrated novel genre.

Frank and Agatha, the narrators of the story, are stranded on an island. There they meet the Roslanders, a clan of aquatic creatures with fish tails and human torsos, called merbeings. The Roslanders introduce Frank and Agatha to other tribes of merbeings and convince the leaders to tell their stories so that Agatha may record them. Agatha transcribes the details concerning their migrations, conflicts, rituals and systems of justice with the mildly dispassionate approach of an anthropologist.

Unfortunately, this approach distances readers from the narrative thread of the novel. While the author manages to create some dramatic tension, as when she describes the skullduggery of one particular merbeing and his subsequent punishment, for the most part, readers are left too far outside the action and the psychological makeup of the characters to truly engage with the story. For instance, when one mother merbeing is told that her son was killed in a shark attack, readers know so little about her that they can’t empathize with her loss.

Frank and Agatha, are also sparsely developed. What are their daily struggles when living on the island? Do they get tired of only having each other for human company? The author doesn’t explore even these standard castaway issues.

Rose’s novel is also weakened by numerous run-on sentences, typos, and verb agreement problems. Consequently, although Tales of the Merbeing Clans might some day appeal to fantasy fans, it would need revision, both in story content and writing mechanics, to reach that point.