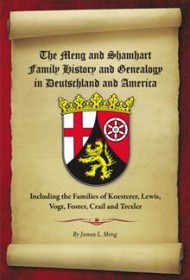 James L. Meng spelunks the intricate depths of his German heritage in this ambitious, well-researched genealogy covering multiple centuries as well as historic figures that crossed paths with some family members.

The author began the 15-year project after unearthing boxes of family photos and documents. He enlisted the aid of a relative in Germany, whose dedicated assistance helped him connect the dots to ancestors who migrated from there to both the United States and New Zealand.

The book not only lists numerous names, births, deaths and locations of family members, but offers insights into the ancestors’ lives. Meng’s DNA testing, for example, revealed that all the Mengs are related to John Hanson, first president of the Continental Congress in 1781. One Meng served as captain under Gen. George Washington. Another was a neighbor of Benjamin Franklin. His mother’s side holds a distant connection to Marie Antoinette.

Along with stories detailing Meng’s early childhood, employment, marriage and child rearing, the weighty tome bulges with a scrapbook-like collection of black-and-white photos of family members, newspaper stories, homesteads, and documents of all types (some muddily printed and a bit difficult to decipher). There are drawings of ancestral branches, helpful maps and details on historical events as well as the harsh political situation in Germany that prompted distant relatives to seek opportunities elsewhere.

Despite its length, the book is clearly written and easy for family members to maneuver, thanks to the inclusion of a detailed table of contents and an index (though the index isn’t as robust as one might wish). Meng also appropriately credits the many external sources he used in collecting the massive amount of information.

Obviously, this is a book written for readers from specific family trees. For these current and future family members, this impressively assembled history will be a treasure.