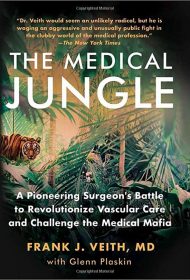 Until the early 1970s, patients with lower limbs affected with gangrene traditionally received amputation. When a young surgeon working at New York’s Montefiore Hospital helped develop better techniques for vascular repair, however, up to 90% of affected limbs were eventually saved. This marked the beginning of a pioneering career that established author Frank J. Veith as an icon in the field of vascular surgery, which he fought to make an independent specialty.

Detailed in this account of his illustrious career, Veith would go on to develop revolutionary techniques that overcame obstacles to lung transplantation, was the first to repair aneurysms and obstructed arteries using less-invasive endoscopic procedures, published more than 900 medical journals articles and established the prestigious international VEITH symposium that provides continuing medical education for vascular surgeons. He currently serves as a professor of surgery at the Cleveland Clinic and at NYU where he has an endowed chair.

Yet, throughout his career Veith repeatedly had to fight a monolithic medical establishment that chose the bottom line over patient care and protected its own specialty turfs. He bemoans encounters with colleagues who sometimes claimed his innovations for their own and administrative hostility to the costs of innovations. Despite his accomplishments during his 30 years at Montefiore he eventually was terminated, which he believes was due to his fight to bring vascular surgery into the medical mainstream.

Rather than to list complaints, however, the author’s mission in writing this book is to inspire and educate others as they attempt to build their own legacies and improve medical care. The narrative is frequently documented with actual cases, such as saving the mobility of a young tennis player attacked at knifepoint. Veith also offers details of those who died after procedures.

The medical terminology would be a challenge for nonmedical readers, but the book is a must-read for those in vascular medicine along with others who want to positively effect change in their own medical specialties. This inside look at a trail-blazing surgeon’s decades-long fight against the medical establishment is a fascinating chronicle of the complex inner workings of the “medical jungle.”