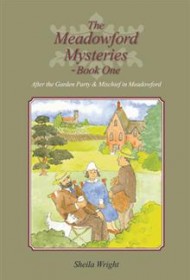 Author Sheila Wright has cooked up a perfect pair of “cosy” mysteries set in rural Suffolk, England in the 1920’s. Each has its own murder, but the characters and setting overlap.

In “After the Garden Party,” a body discovered in a coal chute turns out to belong to a man who nearly everyone in town was glad to see perish. Still, one blow was responsible for his demise, and the erratic behavior of each guest needs to be parsed for clues. “Mischief in Meadowford” turns on poisonous mushrooms slipped into the vol-au-vents (a type of pastry) at a beloved (or was she?) matriarch’s 90th birthday party.

Wright has written nine other books on a variety of subjects and has an assured hand with genre fiction. She doesn’t have to tell you a character is from the lower class; she merely has to let him mispronounce the poisoned food as “vollavongs” and we can see him clearly. Cosies tend to be overstuffed with tweedy eccentrics, and these stories don’t disappoint. There’s many a pipe lit or tapped out, a Colonel, a Basil, spinneys, hedgerows, and lots of chat about everyone’s time and travels in Kenya, then under British command. And plentiful tea! But some of it might be poisoned, so proceed with caution.

Mystery fans will love these traditional tales, which read like Agatha Christie or P.D. James. Wright knows her craft, and it shows.