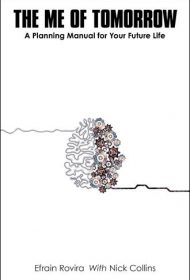 Efrain Rovira wrote this self-help guide to encourage readers to think of their “future mes” and plan rigorously for the tomorrows ahead.

As young teens growing up in Panama, Rovira and his friends dreamed of someday having secure, well-paying jobs. Rovira particularly admired a neighbor who was an engineer at a power company and enjoyed a comfortable lifestyle. The author and his best friend decided they, too, would become engineers.

Rovira became obsessed with studying to secure a place on his high school’s highly competitive science track. His best friend, however, failed to do the same. Rovira made the track; his best friend did not. Rovira concluded that having a goal is only the first step; planning and hard work are required, as well.

That’s not as simple as it sounds, Rovira notes. He cites studies that show the ability to reject instant gratification for a future reward doesn’t come naturally. To a typical 25-year-old, the idea of making an investment that won’t produce benefits until 50 seems less attractive than spending money now, on something fun.

Rovira advocates a wide range of actions, both professionally and personally, to set up a fulfilling life. He urges readers to manage time wisely. “Rich people don’t watch TV,” he writes. Instead, he writes, “Reading broadly and deeply is the key to success.”

He also discusses relationships; the attributes organizations value most in employees; work-life balance; the importance of curiosity; self-knowledge (using employee personality assessments, such as the Enneagram); the idea of “income vs. wealth” and more.

Rovira’s advice is practical, if not ground-breaking, and includes many easy-to-understand charts as self-assessment tools. The writing is clear and to the point, if somewhat dry.

Ultimately, Rovira succeeds in making a solid case for building a future based on carefully curated habits and behaviors. His book would make a good gift for recent graduates and a useful addition to anyone’s self-improvement library.