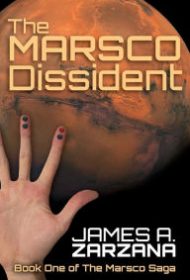 James A. Zarzana’s stellar debut novel, the first installment of a projected quartet, is grand-scale science fiction at its very best. Reminiscent of speculative fiction masterworks such as Ben Bova’s Grand Tour and Isaac Asimov’s Foundation, this shelf-bending novel explores a near future where, after an apocalyptic war that killed billions, a multinational corporation called Marsco has essentially replaced all governments with a cyber nation, or a “meta-nationality.”

The book is set in the late 21st century, a time when national boundaries have been eradicated and humankind has been subdivided into subsidiary areas, which are highly developed industrially and technically, and unincorporated zones, which are valueless regions where the poorest people live in squalor. While the so-called “associates” have thrived under the new Marsco way of life—they have disc implants on their fingertips, allowing them instantaneous access to the Marsco Net—countless more are living, and dying, in abject poverty.

Lieutenant Tess Miller has embraced the Marsco ideal, but when she sees how the corporation/government has manipulated and systematically oppressed her legendary father, a spaceship designer and Marsco’s “most famous dissident,” she begins to look at her world in a different light.

The multiple storylines make for slow going initially – the pacing isn’t exactly brisk – but once readers understand the interconnectivity of the various story threads, the behemoth of a narrative really gets going. It’s rare to call a 600-plus-page novel a page turner, but this doorstopper of a read is most definitely that.

A paradoxical and highly appealing blend of utopian and dystopian elements, this story is powered by a cast of fully realized characters and a meticulously described and obviously deeply contemplated near future that is terrifyingly believable. Conceptually rich and thematically profound, this glimpse into humankind’s outlook is both harrowing and hopeful.

Does Zarzana’s Marsco saga have the potential to go down as a science fiction masterwork? Absolutely, but with three novels to go, only time will tell.