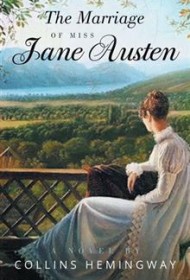 Few authors who have been so unknown in their lifetimes have gone on to achieve such enduring popularity as Jane Austen. Consider the sheer number of copycat books, portraying Austen as an early 19th century detective, for example, or offering contemporary takes on her stories. Collins Hemingway’s book rises above these contrived efforts by placing a very human Jane into a vibrant, turbulent England that is seeking new ideas but also fighting the Napoleonic Wars.

Hemingway immediately captures readers’ attention with the clumsy entrance of ebullient young Ashton Dennis to the staid perfection of the wigged, coiffed and gowned eligible young ladies awaiting the ball’s first note. Mr. Dennis, 21, and his sister Althea, of good family, have long been friends with Jane Austen, 26, and her older sister Cassandra.

Ashton’s enthusiasm for new inventions and scientific discoveries — the hot air balloon and steam engine, for example — sometimes overshadows the strict social mores of the time.  Although forthright and outspoken, Jane mostly adheres to society’s restrictions, until she succumbs to Ashton’s pleas to join him on a hot air balloon ride that drifts far afield. Both thrill to the freedom the balloon offers, but the ride provokes a whiff of scandal that divides the two families. Jane rejects Ashton’s marriage proposal, believing him little more than a callow youth.

The novel’s scope eventually broadens into the larger world when Ashton searches for new flora and fauna species in the West Indies. His ship encounters a fierce French attack while also being wary of the duplicitous Spanish. A more mature Ashton emerges — as does the potential for the couple to re-define their relationship.

Hemingway captures the energy of the times, while also writing with the irony and sly humor of Jane Austen herself, complete with the stylistic language of the Regency period. This is truly a worthy addition to the Jane Austen legacy, a story sure to please all Austen fans.