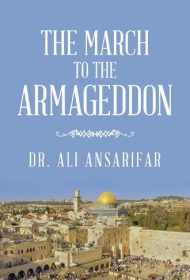 In The March to the Armageddon, Dr. Ali Ansarifar offers a history of Judaism’s struggle with faithfulness to God and explains how the Israelites’ early actions impacted “the biblical prophesies of the end times.”

Ansarifar begins with a history of pagan religions, arguing that humanity’s natural religious state is to worship many gods. With Adam’s creation, however, what became Judaism introduced a revolutionary concept: monotheism, a belief centered on a covenant between God and his people. This contract, Ansarifar notes, was broken numerous times over thousands of years by the Jewish people, leading to such disasters as expulsion from the Garden of Eden, the death of thousands of Jews in Exodus, and the Babylonian Conquest.

Things worsened for Jews with the advent of Christianity, Ansarifar posits. Jesus’s arrival offered a new covenant between God and humankind. Unfortunately, divisions occurred between Jews, Gentiles, and the new group called Christians. These rifts led to the persecution of the Jewish people that lasted for nearly 2,000 years.

How is this related to Armageddon? For Ansarifar, a Christian, the rejection of God’s covenants combined with the rising secular ideas of such thinkers as Karl Marx, Sigmund Freud, and Albert Einstein “…set the scene for the fulfillment of the end time prophesies in the Bible and closing of the age.” Reject faith, move away from God, the author suggests, and there will be hell to pay, literally.

Ansarifar’s book is an ambitious work in which the author demonstrates a solid knowledge of different faiths. Unfortunately, the narrative is often challenging to read. Grammatical errors and convoluted sentences (“However, it is possible that the earliest religious belief systems consisted of monotheism and polytheism which were then combined with less personalised powers and sacred forces and belief in a life after death”) are distracting and often obscure the author’s ideas.

While Ansarifar’s argument that humans cannot handle monotheism is interesting, the book needs thorough editing to clarify his claims.