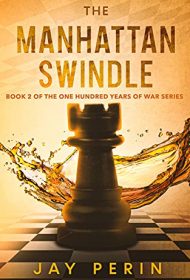 Jay Perin’s new novel, the second in a planned seven-book series based on The Mahabharata, follows three powerful families as they try to consolidate control of the oil industry in the 1970s and 1980s.

The Sheppards, Kingsleys and Barronses, all dynasties to be reckoned with in the energy sector, have intertwined themselves for generations through blood and marriage. Although relations among them are sometimes fraught, they have a common enemy in Jared Sanders, a “criminal oilman” who will stop at nothing to gain a monopoly in the business.

Patriarch Godwin Kingsley, a Supreme Court justice, and his stepbrother, Senator Temple, arrange a marriage to unite the families. They plan for one of Godwin’s grandsons to marry young Delilah, who was born a Sheppard but adopted into the Barrons clan when her parents died. But Delilah’s attachment to Harry, her first love, could present obstacles.

As the story unfolds over a dozen years, readers follow Delilah, Harry and numerous other characters through university, military service, political and business machinations, romantic entanglements and derring-do. The novel comes to a head when Sanders makes a final, murderous bid for power.

Sustaining momentum can be challenging for authors of sagas, but Perin consistently adds plot developments or setting changes to keep readers engaged. A particularly gripping subplot involves the Kingsleys’ attempts (and the devastating results) to negotiate an oil lease with an indigenous Argentinian tribe.

While the story is well-paced, the writing often falters. Overwritten passages substitute for more nuanced character development (e.g., “The shudders of love and longing in her voice immediately morphed into trembles of worry”), and gratuitous adjectives bloat the page count. Oddly, the author uses character names that might evoke other epics (e.g., Delilah from the Old Testament, Hector from the Illiad), but they don’t seem connected to their legendary namesakes in any way.

The Manhattan Swindle is largely entertaining as-is, but improvements to the writing would greatly increase its appeal.