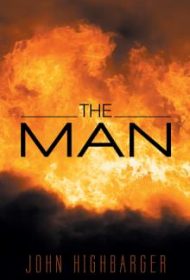 Author John Highbarger crafts a dichotomous thriller whose twin parts don’t seem like part of the same story—until their threads converge during the dénouement.

First, we meet the titular character called only by his moniker. This successful businessman has just suffered his wife’s death, struggles to care for his children, and is consumed with anguish. The story’s inciting event is merely a dirty cop writing the man a ticket, but the consequences are murderous.

Much like Steve McQueen in the classic The Thomas Crown Affair, “the man” anonymously assembles a team of pros to pull off a gig, in this case building a global, technology-driven platform to sell drugs. Blackmailing a dozen cities with terrorist threats gives him his starting capital. His hires are rather sketchy characters, among them a loyal lieutenant, an assassin, a packaging wizard, and the drug lord who supplies the product, as well as dealers. The scheme earns billions, giving “the man” the cash to launch other businesses, among them a secret project to develop a particle beam weapon.

A lengthy time jump and a jarring break introduces Jack, a wealthy mogul dedicated to ending the drug trade. Here the story morphs into a byzantine political drama as Jack manipulates the country’s election systems to ensure his daughter Linda runs for president, even heading up a new political party based on the tenets of the Declaration of Independence.

These storylines converge in a fairly obvious way, but putting this and some suspension of disbelief aside, Highbarger does a commendable job crafting a twisty thriller. The writing is crisp and the characters are well-developed. While the book’s back half drags a bit with tedious descriptions of political machinations, it also neatly ties off loose ends—elegantly concluding the story.

Despite some flaws, readers will find much to like in The Man.