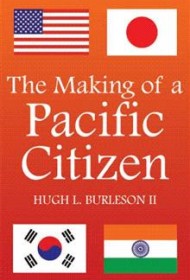 Dwight Eisenhower and Monkees’ lead singer Davy Jones make cameos in Hugh L. Burleson’s informative, highly readable memoir about his life in the U.S. Foreign Service. Bold-faced names are just the spice, though, in this delightful story of a diplomat’s satisfying career and marriage, beautifully told.

Born in 1927, the son and grandson of Episcopal ministers, Burleson describes a poor but eventful childhood that sets him up to be a white-collar adventure hero. Drafted and dispatched to post-war occupied Japan, he learns Japanese and marries the “cheerful and ever-upbeat” Kimie, before joining he United States Information Agency. Primarily stationed in Japan, he also enjoys posts throughout the Pacific. From New Delhi in 1980, he departs on “another round-the-world trip — my fourth?” to learn about computers in Silicon Valley, then returns to alleviate his staffers’ fears about the technology by introducing the new workstations as “R2D2 and C3PO.”

Burleson has a charming writing style. On a luckless fishing day, he asks his nearly 3-year-old son to hold his fishing pole a moment and the boy catches a 12-inch striped bass. “Is that ‘paternally induced piscaphilia’ or what?” he jokes. Judging by the astonishing details (he mentions every car he bought, the fishing techniques of a Guam family in 1969 and so on), his journals weren’t among the 2,000+ pounds of possessions lost when he and Kimie fled Vietnam with other diplomats right before Saigon fell.

At 421 pages, the book could easily have been trimmed. But you dare not skip a page or you’ll miss a laugh about how this straight-laced GI gives MPs the slip or insights into how our largely faceless diplomatic corps “makes the U.S. understandable to the world.”

All types of readers will enjoy this overview of America’s post-war relations with Japan from a lucky man with a front row seat — next to a strong-willed woman who is a fully formed, complex character herself.