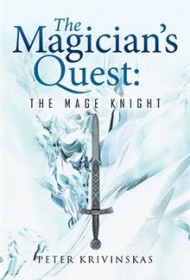 In this fantasy adventure, presumably the first in a series, a millennia-old magician has grown tired of his stagnant life and seeks a fresh start as a knight and a hero.

The magician, who re-names himself Sir Stefan, sets out into the Kingdom of Helfing with a regenerated body and equipped with magical weapons. He soon finds an opportunity to use them when he runs into the enemy army of the neighbouring Kingdom of Kytan. Stefan uses his knight abilities and some of his old magic to rescue the captured Helfing Queen, Sophie, and her companion, Marta, both of whom quickly fall for him, and help them recapture their castle.

After romancing both ladies, Stefan marries the Queen and becomes the King of Helfing, using his magic to rebuild the devastated kingdom and his knighthood to defeat Kytan’s evil King.

Despite an overly simplistic writing style and some poor grammar, the book has a promising start with many imaginative ideas introduced, such as the creation of an invisible magic helmet. Unfortunately, the rest of the book fails to live up to these expectations and becomes a standard and predictable good versus evil fantasy with archetypical characters. Major plot points and potentially exciting action scenes are glossed over and replaced with excessive descriptions, which soon become tedious. More attention is given to the digging of latrines, for example, than to the development of a romance.

Stefan is a fairly flat character with no perceived personality or flaws. When seeing the body of a mother who was killed and possibly raped, for example, he shows no reaction. Additionally, his status as a knight seems pointless when he has a magical power that can readily solve every problem he comes across.

It’s clear that the author has put a lot of thought into the creation of this fantasy world. Unfortunately, the flaws mentioned will likely impede readers, both hard-core or casual fantasy fans, from connecting with the narrative.