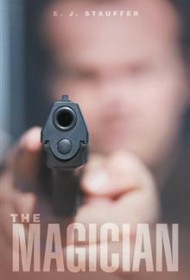 Ben Knight carried out many high-profile assassinations for the U.S. government, until a close call ended his career. Now, he lives outside a small Illinois town with a female German shepherd named Max as his closest companion.

Meanwhile, Ellen O’Neil has fled an abusive husband and taken their young daughter, Marianne, with her. Mother and daughter wind up at Ben’s door on a rainy night when they are in distress, and against his better judgment he takes the strangers in. Soon, Ben finds himself growing attached to the pair.

When Ellen leaves abruptly to return to her husband, Ben once again gets used to being alone. Then, he learns that Ellen has been killed in a mugging and has named him Marianne’s guardian. Reluctantly at first, Ben takes the girl in and acquires another adopted daughter, Emily, when a former colleague dies. But just as Ben’s life seems to be settling down, his old employers contact him with one last assignment.

Stauffer’s narration has a cinematic efficiency. This quality sometimes works well, giving the novel’s more action-oriented scenes a kinetic feel. But the characters are somewhat hollow, as though they need actors to bring them to life. While some moments are skillfully drawn, particularly Ben’s one-sided conversations with Max, in general the characters never feel like real people.

The Magician also feels shorter than is comfortable for its eventful plot, and some plot points aren’t well developed. For example, Ellen’s sudden return to her husband and her subsequent death seem suspicious, but Ben never takes them at anything but face value. In another instance, a violent turn of events seems to come out of nowhere toward the end of the novel.

The Magician has a great deal of potential and some intriguing scenes. Overall, however, it is unlikely to stand out in the crowded thriller genre without further development and polishing.