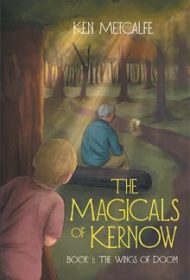 In The Magicals of Kernow, the first of Ken Metcalfe’s children’s chapter book series, goblins and fairies become trapped in the real world, living alongside humans.

Magnetic forces created from an asteroid nearly colliding with Earth have closed gateways to the magical world, leaving goblins and fairies stranded, and having to share territory and food. Tired of living on “meagre rations,” Blackwort, the goblins’ cruel, greedy leader, vows to wipe out the fairies living nearby. As the goblins encroach and a fairy is killed by one of Blackwort’s lieutenants, head fairy Tilly persuades her fairy family to move back to Polquite Wood, their ancestors’ home. Although years earlier it was the site of a deadly fire, she assures them that the new human owners have rebuilt the old mill and rehabbed the woodland.

The fairies’ nearly two-day trek is a page-turner, fraught with danger as they fly over goblin land. When a goblin gets covered in fairy dust spilled by an incautious adolescent fairy, the goblin’s behavior deteriorates to that of a crazed dog. Faced with crossing a dangerous open field, the fairies camouflage themselves as giant birds as they head to Polquite Wood.

The story flows smoothly, and Metcalfe seamlessly weaves together the actions of the goblins, fairies and humans. His characters and setting are distinct (so much so that the book begs for illustrations). Young readers will also love the silly character names: Godbroth Cheeswort, Drabtooth, and Dizzy Cloverleaf.

At times, however, the story straddles an uneasy line between silliness and cruelty; Blackwort drowns a dimwitted goblin, then threatens another until he pees in his pants. Finally, no longer motivated by hunger, Blackwort declares he wants to kill all the fairies—simply out of blind hatred. Additionally, readers may become impatient by the too-long introduction and descriptions and dialogue of the human owners and their family.

Despite such issues, there is much to like here. Middle-graders fantasy lovers will likely look forward to Book 2.