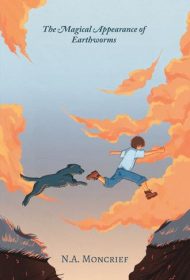 Author N.A. Moncrief’s captivating memoir details his childhood in rural Australia through the age of 15, eloquently recounting both uplifting and heartbreaking times.

Moncrief’s childhood in the 1960’s was spent wandering “feral” through the surrounding fields and forests with his beloved dogs. But he also experienced much darker moments: His beloved mother, who had a strained relationship with his father, unexpectedly left home when Moncrief was ten. He didn’t see her again for 23 years. In another chilling episode, Moncrief is digitally raped at age 11 by his troubled and violent older brother. “I didn’t struggle,” he recalls. “I was a rabbit in the headlights.” Later, he “packaged up the memory and forced it into a cage,” he notes. “It didn’t go easily.”

Moncrief’s early teen years became chaotic as his father and his father’s new wife descended into alcoholism. Still, he found solace in close bonds with his stepbrother and grandmother. And although his father could be cruel, he also displayed great affection toward his son at times.

The author sees his world through an artful and insightful lens, rejoicing in the beauty around him, despite his troubles. After rehabilitating an injured sparrow he called Sydney, Moncrief released the bird. “Sydney was gone, and I was flying with him,” he writes. “I carry a special place in my heart for Sydney who gave me the gift of exhilaration.”

The narrative is also frequently funny. For example, Moncrief recounts harrowing trips to the “outdoor dunny” as he was chased by a vicious barnyard duck. “Off I’d bolt at one hundred miles per hour towards the dunny…with Virgil in hot and terrible pursuit!” He would subsequently hear the duck slam into the dunny door with a “massive thud, unable to stop his screaming momentum.”

Throughout, Moncrief displays an inner grace, believing that the sum of his life experiences, both good and bad, prepared him for adulthood. “So grateful I am,” he reflects at book’s end.

Moncrief picks himself up after each challenge, each time standing a bit taller. His inspirational and entertaining story recalls singular memoirs such as Mary Karr’s The Liar’s Club and Jeannette Wall’s The Glass Castle, which linger in the memory long after the final page.