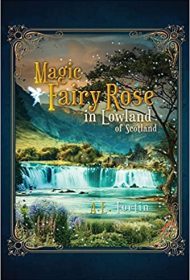 Magic Fairy Rose in Lowland of Scotland is an historical romantic fantasy focusing on the exploits of highlander Thomas MacGregor and his quest to avenge the deaths of his brothers at the hands of a murderous demon.

Following a prologue to impart background information, the action shifts to 17th century Scotland. A multitude of characters are introduced, including key protagonists Thomas MacGregor and Eleanor Heart.

Initially, the novel focuses on Thomas and Eleanor’s budding romance: their courtship, sexual awakening and burgeoning telepathic link. With their romance established, Thomas sets out to recover the bodies of his missing brothers and confront the demon responsible for their demise. Along the way, Thomas encounters enchanted roses, mythical creatures, and communes with supernatural beings. He also develops magical demon-hunting abilities to assist him on his quest.

Narratively, the novel makes admirable use of standardized quest-fantasy tropes and historical context to relate its entertaining, if somewhat protracted tale, of good versus evil. The author paints a vivid picture of the rural locales, colloquial Gaelic dialects and clannish inhabitants of the period, integrating folk magic and religious elements throughout.

Unfortunately, the story also presents problematic issues. Characters are stereotypical, with male characters depicted as libidinous warriors and females as validation-seeking lovers and mothers. For example, Thomas states, “Eleanor is everything I want in a wife… she can cook, and she knows when I need her the most.”

More troubling are the excessive grammatical and spelling errors. Sudden changes from first to third person as in “I remember touching Eleanor’s face then looked at his mother” are jarring. Spelling errors, meanwhile, such as “down pore” instead of “downpour,” “be a where of” instead of “aware of” and ‘When we were riding toured our son,” instead of “toward” make it hard to remain engaged.

With revision to correct such distracting technical errors, this fantasy could appeal to both historical and mythical fiction fans. As is, the novel delivers a difficult read.