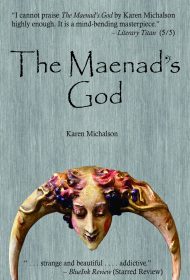 Karen Michalson’s first fiction release since her Enemy Glory trilogy is a genre-blending narrative that combines rock n’ roll and mythology with magic realism and crime fiction to create a highly palatable story with a distinctly unique flavor.

Set in 1992, the story revolves around Peter Morrow, a jaded Boston-based FBI agent who is sent to an army base outside of Rome, NY, to track down a private named Claude Hopner who is rumored to be selling drugs from his location at the base. The drugs are allegedly being supplied by a Mafia family in Utica.

When Morrow arrives at the base, however, he finds Hopner AWOL but stays to interview—and watch—a Toronto band called Black Dog that evidently got the gig through the mysterious Hopner.

When the base’s commander is found ritualistically murdered, Morrow becomes entangled in a decidedly bizarre mystery that includes a band featuring a sexy bass player who may be the son of a god, a conspiracy involving organized crime, and a seemingly ageless witch involved in a centuries-old war with a monster posing as a human (who is on the FBI’s most wanted list) bent on destroying human society and culture.

Readers who enjoyed Michalson’s Enemy Glory trilogy will find this novel a much deeper, richer—and more intimate—story. Blurring the lines between reality and fantasy, the author delivers a strange and beautiful narrative tapestry woven with threads of music, myth, and magic. These strands are held together by what seems to be the author’s very essence; more than a few sequences feel like they’re thinly veiled autobiographical statements, such as, “I’m a madwoman scholar who writes books and plays music.”