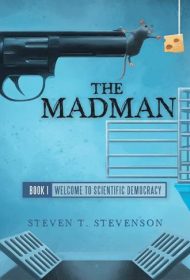 Steven T. Stevenson’s dystopian novel (which, according to the Preface, can be read as either the first of a two-book series or the second of a three-book series) follows an everyman through a cruel and absurd technocratic bureaucracy.

Protagonist Steven grows up in an orphanage. When he reaches age 30, the government sends him to work at the multi-tentacled Center for Scientific Democracy.

Steven first works in a lab that lobotomizes babies in the (artificial) womb as a means of social control. (Natural gestation was outlawed years ago.) He next winds up at a news organization, which publishes blatantly false clickbait, and finally at a hospital, where he uncovers the Center’s darkest secrets.

His co-workers are alarmingly fragile, both physically and mentally, and a draconian system that rewards absolute conformity governs all aspects of people’s lives. After falling in love with Emily, a young woman determined to maintain her family’s traditional way of life, Steven decides to rebel against the Center and its tyrannical director.

Stevenson delivers a bleak view of the future that – in its obsessions with technology and easy sensual pleasures – is alarmingly close to the present. At times, his satire is dead-on, as when Steven goes to buy a self-driving car and is offered options including the “Parking Lot Sand Shark Program” with which “the car will wander around for twenty minutes looking for a spot that is ten feet closer to the building.”

Despite the sharp social critique, however, this doesn’t hold up as a novel. Most of the book consists of the director and others explaining the idiosyncrasies of Steven’s new world, while Steven reacts with bewilderment or revulsion. Steven remains a fairly passive character through much of the story, only developing agency when he meets Emily, over halfway through the novel. This makes for weak narrative drive.

Although it contains some gimlet-eyed social observations, The Madman needs stronger propulsion before it’s likely to appeal to a wide audience.