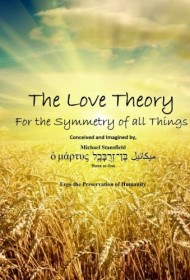 A sense of dissatisfaction with organized religion runs throughout Michael Stansfield’s The Love Theory, a book that serves as the author’s call to action for Islam, Christianity and Judaism to cast aside old ways and embrace a new path of unity and harmony.

After intensely studying the Bible and developing his hermeneutic ideas based on ancient scripture, the author was rejected by some in religious power for his belief that Jews and Arabs are the real heirs of Israel. The rebuff led Stansfield, raised by missionary parents, to a conversion of heart and mind: “I must become a Muslim,” he writes, “to exploit the lack of faith in Zionism as it is followed by both Christianity and Judaism.” The Christian and Jewish establishments, he continues, “can choose to fall to Islam or they can yield to the truth.”

The Love Theory can be difficult to follow, due to a lack of transitions, editing and a well-defined thesis. It seems to proffer a revised understanding of God’s covenant with his people (not just one people, but many) and stresses that society has a responsibility to help the often-forgotten poor. The author explores moralist, humanist, capitalist and socialist ideas, ultimately rejecting secularist materialistic beliefs and the religious beliefs of those who see God as too small: made in the image of man and not in the image of God.

Stansfield’s intelligence is apparent, and his book examines such wide-ranging topics as Old Testament theology, economic infrastructures of the U.S., inalienable rights, the American court system, the Constitution, and globalization. Such diversity of thought makes for difficult reading simply because there is so much to digest. Moreover, the book needs copyediting to catch punctuation problems and word misusages (e.g., “trader” vs. “traitor”).

Many may find The Love Theory too revolutionary for ordinary tastes, but that seems to be the author’s intent: “The days are looming when those who rejected the Word of the Lord I proclaimed to them will seek me out…[I have left this book] so that those who will listen may understand the truth and the truth may set them free.”