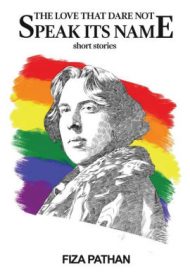 Fiza Pathan’s short story collection shines a spotlight on the difficulties faced by young people in the LGBT community. Though fictional, these tales serve as a reminder that despite great strides made in recent years, being LGBT can still be extremely difficult, even dangerous.

Most of the stories occur in the present day, and are set across the world, including England, Australia, America, India, Thailand, Iran, and Syria. They illustrate all facets of the LGBT experience, from gay men and transgender people to asexual and pansexual folk. Many end sadly.

In the title story, a young Indian man comes out to his father in a letter about his love for another young man. His younger sisters later hear their father whipping him, and his lover then sees him marrying a woman chosen by his father.

In “The Girl’s Bathroom” set in the months leading up to the 2016 presidential election, a young transgender girl is not allowed by her school to use the bathroom of her gender. The rhetoric of one candidate (never named) leads to more hate against the girl and her friends, convincing the girl to make a tragic decision.

The writing is generally spare with little flourish. And while the plots are compelling, the stories are marred by dialogue that, at times, sounds stilted and unrealistic. For instance, a five-year old tells his parents “I decided that my enemy was my penis.” When a boy comments on his friend’s athleticism, the dialogue is unnaturally expository: “You are the upcoming star player of New York Harbor. One day you will even beat Shawn Stillion’s record of three-point shots of 2010.” These moments take readers out of the story.

Pathan’s stories are notable for their sympathetic characters and strong message of tolerance.  However, they require more writing finesse to reach their full potential.