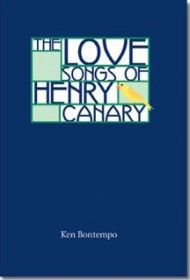 The protagonist of this intriguing road novel is a bundle of tragic mishaps and touching insecurities, of sexual boasts, soul-killing regrets and occasional triumphs.

A truck driver and writer, computer wiz, failed husband and traumatized Vietnam vet, Henry Canary at his best embodies the restless, questing spirit of America from the 1950s to the 1980s—a wanderer bravely looking for love, truth and satisfaction. But Henry also displays some of our worst traits. His self-pity is irritating (“Goddamn you, isn’t there room for a poet in this world anymore?”), his misogyny appalling (“If women wanted perfection, maybe they should spend more time improving themselves”) and his “philosophy” can be shallow (“My point is you should try to enjoy life while you’re alive”).

In other words, he’s contradictory and complicated enough to always hold our interest. That suits a man who calls himself “an emotionalist with a typewriter,” a description that also fits his creator, 72-year-old advertising copywriter Ken Bontempo, who frames the book as Henry’s interview with a young magazine writer who becomes romantically entangled with her subject.

Like Henry, Bontempo was raised in Connecticut, and perhaps he, too, may have traveled cross-country with a buddy and two hookers, driven a taxi in New York, sampled sex, drugs and rock n’ roll in San Francisco, thrown dice in Vegas and cursed God for His mistakes. The fact that Henry loses two brothers, an infant son and the love of his wife, that he’s plagued by war guilt and driven to sexual adventurism, endears us all the more to this imperfect character. He even manages to understand some of his faults (“I’ve wasted my life being angry at unfairness”).

Bontempo can drift into melodrama, and his sex scenes reveal a lingering taste for adolescent pornography. But Henry Canary comes off as a classic American archetype—tormented and bewildered, but ennobled by his search for Light. Readers will appreciate getting to know him through this tale.