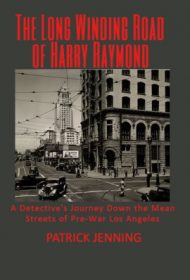 Patrick Jenning’s The Long Winding Road of Harry Raymond is the biographical account of LA-based detective Harry Raymond’s storied career, detailing the cases that earned him glory, scorn, and powerful enemies along the way.

After working as a private investigator tracking down confidence-scheme charlatans, Raymond honed his skills as a pioneer in the burgeoning field of auto theft investigation. Innovative thinking, such as sending out blast telegraphs with detailed suspect information to police stations, earned him the respect of his colleagues and the public.

A dogged detective, Raymond also drew scrutiny for his penchant for physical violence and false imprisonment to extract information from suspects. During his tenure as chief of police in Venice, California, from 1917 to1918, at least five criminal lawsuits for false imprisonment were filed against him. In one instance, a woman claimed to have witnessed a member of the Venice board of trustees selling morphine in the vice district. When it became clear the trustee had been set up, Raymond arrested the witness, confining her in her home for 11 days while police collected evidence. Raymond was later fired from his position.

In 1930s LA, the “vice” district was awash in mob violence and illegal activity. After Raymond uncovered evidence of involvement by corrupt government officials, he was severely injured by a car bomb. In the aftermath, he was “celebrated…as a tough, defiant man unafraid to take on the powerful political and criminal forces that tried to kill him.”

Jenning packs the book with lively stories filled with “goons” and “coppers.” He also delivers a fascinating blueprint of the rise of power and corruption in civil service that reshaped the criminal justice system.

Extensively researched and annotated (the bibliography is seven pages), Jenning’s narrative digs deep into Raymond’s personal history and that of many of the players in his cases—although excessive detail, such as where the person’s parents were born, how they met, etc., frequently overwhelm the narrative.

Generally, though, engaging stories and Raymond’s outsized persona compensate for these elements, making the biography worth the journey.