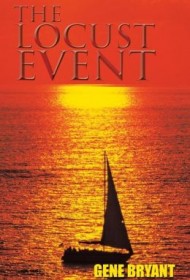 Corruption in China, corporate greed and a wildly lethal virus all play into this well-imagined and detailed but uneven modern-day medical thriller.

Caught up in the drama are two principle characters. Jaime Jones is a leading microbiologist at a medical research firm seeking to stem lupus and cancer. Her former Harvard classmate, Chinese virologist Shing Shen (aka “Slinky”), is newly recruited by Chinese leaders to work on a secret vaccine project. He soon learns the government has sinister plans for economic takeover of the world using a virus called Locust.

When the Chinese unleash the Locust virus to quash an internal uprising, they unwittingly cause a calamity that rapidly wipes out much of the world’s population, save for a rare few who somehow are immune. The drama bounces from Beijing and an ancient Shao Lin monastery to points including San Diego, Canada, and the Hawaiian Islands as the few survivors cling to dwindling hope for the future.

Author Gene Bryant knows his way around a medical lab and is spot-on when explaining viruses and genetics. The various settings and some characters are rich with detail, capturing the good and evil in people when faced with devastating circumstances.

Throughout, however, the story oddly slows and quickens, starting at a snail’s pace, building in action about 40 pages in, then bouncing back and forth in cadence rather than steadily building to a crescendo. This uneven pacing often saps needed tension. Additionally, in an effort to point out the sorry state of a world rife with greed and environmental disrespect, the author undermines the ending by becoming too preachy and failing to allow readers to arrive at their own conclusions. Finally, the text includes errors in punctuation, use of tenses and spelling (“feint” for “faint”; “dessert” for “desert”).

While unbalanced as a thriller, the novel has promise and the potential to lure a wide audience if rewritten with stronger pacing and less heavy-handed moralizing.