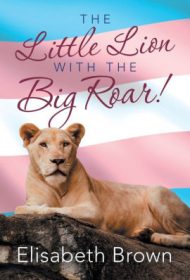 Elisabeth Brown’s picture book The Little Lion with the Big Roar! is based on the real-life experiences of the author’s transgender daughter, Jennifer.

Dillion, a male lion cub has feelings he’s trying to understand. He doesn’t like chasing or wrestling with the other male cubs and spends much of his time playing alone. When he watches the female cubs, he observes that “they seemed gentler, always cleaning themselves, making sure they looked beautiful.” He wonders, “Why do I have to live like this? A lioness in a lion’s body!”

Years go by with Dillion wishing he could voice his feelings but terrified of the anticipated ridicule and possible loss of his family. One day, Dillion meets a lioness and although the two make a “beautiful couple,” they eventually part. Years later, Dillion has two cubs and without a partner, he provides and cares for them alone. Finally, when his cubs are grown, Dillion shares his emotional struggles with them and they have discussions about his “changes.”

At story’s end, Dillon renames herself “Edrei” (meaning strong and powerful). In the postface, the author’s daughter discusses her struggles with transgender issues and the love she has received from family and friends.

While the story offers an important message, unfortunately, the narrative suffers several flaws. Dillion’s feelings are sensitively described, but they are also wearingly repetitive. And the analogy between animal and human ultimately fails. Readers will be perplexed when Dillion’s mother chides him for wearing his mane “like the other lionesses” as a lioness with a mane is rare. Equally puzzling is Dillion’s statement about the need to keep his feelings secret: “I didn’t want someone coming and taking my two cubs away because of who I was…” While custody issues might come into play in the human world, this makes little sense in the animal kingdom.

In sum, this well-intentioned story with its lovely and hopeful ending requires revision to engage a wide audience.