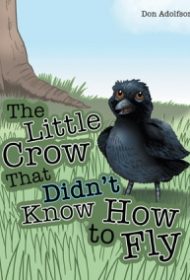 The inspirational tale of a young bird is the subject of Don Adolfson’s picture book The Little Crow That Didn’t Know How to Fly.

Little Crow is scared to take the leap from his nest and fly, and when he finally dares to try, he fails. On the ground, he continues to struggle, despite his mother’s best efforts to teach him. A neighbor witnesses Little Crow’s difficulties and brings out a pull-along toy bird to entice him to keep trying to fly. Finally successful, Little Crow proudly shows his family his newfound flying ability.

The book has a pleasant tone and endearing protagonist, and although a bird struggling and finally flying isn’t a particularly original concept, the neighbor and toy bird add a unique wrinkle to the story. The book’s main setbacks are from strangely written or poorly edited sentences, such as “This is the story on how one Little Crow overcomes his fear of the unknown,” or “Little crow was not only surprised at what he had done, that he kept right on really flying [..]”

The final page explains the book’s message “that with God’s help you too can succeed,” but there’s no reference to God during any of Little Crow’s struggles. Frequent punctuation errors also confuse meaning and slow the plot.

The illustrations are appealing, but the words and pictures aren’t always in sync. For example, Little Crow is described as “almost as big as she [Mama Crow] was” and “not so little anymore” but in the accompanying illustrations, Little Crow appears much smaller than his mother. In another scene, the text describes Mama Crow as having flown to the top of a tree to think, but the illustration shows her next to Little Crow, on the ground.

The Little Crow That Didn’t Know How to Fly is a sweet, though flawed, picture book. Readers in the target age range of 4 through 8 might overlook imperfections that parents and teachers won’t.