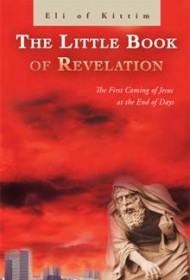 Eli of Kittim, a contemporary author who writes under an unexplained, biblical-sounding name, has devoted a lifetime to exposing “a historical cover-up pertaining to the post-biblical interpretation of Jesus.” The Little Book of Revelation sets up three mega-blows to Christianity, positing that: the advent of Christ is yet to come; Jesus Christ incarnate will be Greek; and the Second Coming of Christ will never happen.

Claiming to have received “an inspired revelation,” the author uses Scripture and other ancient works, such as the writings of Nostradamus and the Dead Sea Scrolls, in an attempt to dislodge Christianity from its historical roots.

The book is beautifully written and the author has put tremendous energy into documentation and literary analysis, but his claims will be shocking and downright heretical to most Christians. And portions of Eli’s documentation and analysis are questionable.

Repeatedly, we are told that the author has allowed the text to interpret itself and that none of his arguments are “founded upon any personal conjecture,” yet he adds his own interpretations within the verses. Showing questionable interpretive license, he quotes that “Jesus ‘had fasted [from sin for] forty days” (note the author’s inserted emphasis on “sin” rather than food). He states that “interpretation, to be effective, requires that we peer at each and every word of Scripture as if with a telescope.” Yet he later writes: “We will omit certain extraneous elements from this phrase … stripping it of its nonessential components.”

Additionally troubling is the author’s sole use of English versions of the Bible. For deep biblical interpretive work, it’s essential that the original languages be consulted, but there is little reference to the original Hebrew and Greek texts, leaving readers to wonder if misinterpretation is occurring alongside highly creative literary analysis.

Despite such flaws, this is an intriguing study. While it might be extremely complicated for the casual reader, Bible scholars and eschatologists may want to consider its thought-provoking ideas.