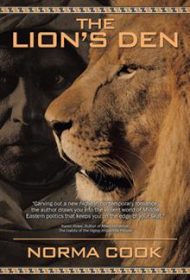 An enjoyable and exciting read, The Lion’s Den offers romance wrapped in a pulse-pounding military and intelligence thriller.

The book is set in 2011 and focuses on Della, whose career as a photojournalist has taken her all over the world, including Abbottabad, Pakistan, where she witnessed the fateful raid on Osama bin Laden’s compound. Della returned to the States bearing the emotional scars of the assignment and carrying the burden of leaving behind her partner and boyfriend, Aaron, who was captured during the raid.

To pay rent and take a break, she accepts a job photographing Caribou in the Canadian Wilderness, where she has a chance meeting with Brad Jamieson. Sparks fly between the two, and even though she doesn’t yet know Aaron’s fate, she can’t deny her attraction to Brad. While their future remains uncertain, Della finds herself caught up in a terrifying and deadly game of cat and mouse between the U.S. and terrorist enemies, and Della and Brad’s breathtaking romance is suddenly consumed by fast-paced political and military intrigue that is utterly engaging and absorbing.

The pace of this story rarely lets up, and the author balances it with a few sexy, romantic interludes. One moment, Brad and Della are sharing a romantic dinner with the promise of a night of passion to come, and the next, Della must risk her life to assist in a clandestine mission. Action perfectly offsets romance, and heartfelt emotion balances the well-executed and painstakingly researched thriller. The story comes to a satisfying conclusion, with the promise of more to come in the series.

With its provocative blend of danger and undeniable romantic chemistry, The Lion’s Den is an excellent choice for fans of romantic suspense.