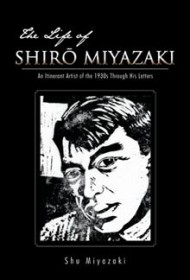 The Life of Shiro Miyazaki is a collection of letters from the 1930s between obscure artist Shiro Miyazki and various correspondents. Passionate about his work, he struggled mightily on many fronts until his death at age 30.

The prevailing immigration law prevented the youthful Miyazaki, an artist living in the U.S. but born in Japan, from becoming an American citizen. A would-be union activist, he said he lacked “the talent to merge in among the masses.” A son of caste-driven Japan, he was estranged from family by his father’s rigidity. A victim of the Depression in California, he had to beg friends for whatever scraps of money they could spare virtually until his death in 1940.

Assembling the letters gave his younger brother, Shu, a chance to understand the sibling he barely knew, but above all they show an artist in a desperate search for ways to communicate his art. He was forever exploring technique despite moments of obvious intense depression noted in his letters; he wrote to two artistic friends in Seattle of “my current worthlessness” and a declaration that “my feelings have died.” He discussed with them the virtues and drawbacks of linocuts, woodcuts, figure drawing and watercolors as well as his art classes and his passion for learning.

At the time of his death of lung cancer, the letters reveal a man thoroughly engaged with his world, despite his depression. His heartfelt correspondence can offer only hints of the artist he might have become.

Although the letters are written occasionally in a broken English that can be distracting, their rawness poignantly illustrates the near-desperation of the man and the energy he expended in trying to organize his life. While the book is not for everyone, those interested in the art world will be moved by this passionate look at one man’s temperament as he battles to define himself in an often indifferent and hostile environment.