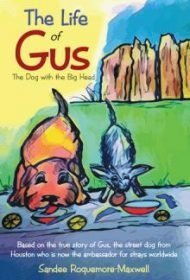 The Life of Gus: The Dog with the Big Head is a heartwarming true story in chapter book format about a Houston street dog who eventually finds happiness with a loving family.

After being abandoned by his young owner, Timmy, Gus learns to fend for himself on the streets of Houston. While searching for food with his new dog friend, Trixie, Gus’s health rapidly deteriorates, partly due to a shoelace that was tied around his neck when he was younger. After surviving many hardships, Gus is eventually rescued by kind strangers who secure the medical attention he needs and help him find a forever home.

This story is filled with heart and contains important lessons about compassion and helping the less fortunate. Children will be drawn to Gus’s upbeat personality and scenes from his happy early life.

Because the story is written in first person and readers can only see the world through Gus’s eyes, however, certain sections seem limited. For example, Gus’s world shrinks considerably after Timmy ties him up in the backyard and slowly forgets about him. As Gus obsesses over his situation (“The only thing worse than being outside in the cold is being outside in the cold and being HUNGRY TOO,” etc.), the story might lose a young reader’s interest.

Additionally, it’s often unclear what Gus understands of the human world and what he doesn’t. Certain words and phrases are used in quotes (“stop,” “cold as ice,” “adored,” “a star”), seemingly to show that they are new to Gus, but the use of quotes is inconsistent and confusing. The narrative also includes run-on sentences (“This was new to me and I did not like it at all, but I really had no choice, this was my life”) and other grammatical errors.

That said, The Life of Gus will give kids and families an opportunity to talk about responsible pet ownership. It’s a tough but important story with a happy ending.