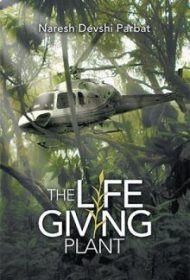 A wealthy but desperately ill gentleman gets a second chance when he crashes into the jungle in this odd, short novella by Naresh Devshi Parbat.

The story’s protagonist is an elderly tycoon in his 70s named Beet Butterfly who is terminally ill and sequestered in a private hospital in Mexico, surrounded by armed guards. With the assistance of his longtime personal assistant and a nurse he bribes with a million dollars each, Beet escapes (it’s unclear why he’s being guarded) and heads south in a helicopter before crashing in a remote part of the Amazon rainforest. There, the king of a native tribe takes pity on the dying man and commands his people to use a rare “life giving plant” to heal his injuries and illnesses.

When Beet awakes from his coma, he has the body of a 30-year-old man, but the king orders him drugged, and he’s dropped near a highway far from the tribe’s village. Confused and naked, but for a flap covering his penis, Beet flags down Juliana, a virtual ornament with “sexy legs” and a miniskirt, who immediately takes a shine to him—never mind Beet’s gold digger wife, who Beet discovers has been cheating on him and is quickly dismissed.

Once the world learns of Beet’s miraculous transformation, everyone starts looking for the life-giving plant, including an unhinged President Donald Trump, who wants the remedy for himself. As Beet acts to protect the natives who saved his life, many graphic deaths ensue.

While imaginative, the narrative presents many shortcomings: The novel’s brevity often leaves holes in a somewhat complex plot; tedious passages tell readers what’s happening rather than showing them, and convenient plot developments undermine believability. The text also displays some racism (e.g., a Chinese woman says “rook,” for “look”) and is peppered with copyediting errors (“fat Chinese’s woman”; “sneaked out the bed”).

The novel delivers a well-meaning message about redemption, but its numerous flaws ultimately outweigh its graces.