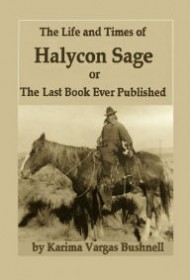 In an Afterword, the author of this brief comic novel says she wrote the book’s second half in two days. That likely explains both its rough edges and its improvisational charm: The Life and Times of Halycon Sage has the stirring immediacy of a guitar riff.

Karima Vargas Bushnell’s title character—hard to tell if “Halycon” is a variant of “Halcyon” or a misspelling—is an interview-averse writer cloaked in mystery. The public wonders if he’s Native-American. He’s consumed by his aversions to machinery, consumer goods and bureaucracy, but devoted to his horse, No-Name Stupid. He’s even said to be an amnesia victim who unaccountably speaks Somali and Arabic. Bushnell playfully makes him out to be a genius who dispenses his vast philosophical knowledge and desire to save the world in famous minimalist “novels” that run only a few words or paragraphs. Sample title: “Boo Radley Goes Hawaiian.”

Bushnell’s own prose is witty and lively. At the funeral of an Indian, Sage observes: “The ‘prepared’ dead people he’d come across before looked like slightly decadent wax dolls getting ready for a hot date, but this body was like a charged battery, conveying not only peace, but energy.”

Bushnell sends Halycon Sage alone into the Nevada desert, away from junk mail, TV and greed, but not far from a benign biker gang, or from those who would unravel his myth: a pompous literary critic named Basel Vasselschnauzer, the batty Eastern European inventor Alex Preisczech and a villain, Niemand Kompt. Sage’s quest? “To use insight, and the magic of words, to get (people) to stop killing each other and abusing the animals and destroying the earth.”

Bushnell clogs the book’s flow a bit with superfluous minor characters such as an al-Qaeda fighter and a Mossad agent, but her vision remains pure. The director of a Sufi center in Minneapolis and sustainable living advocate, she and Halycon Sage both imagine a harmonious post-industrial utopia. It’s a beautiful idea, lovingly expressed.