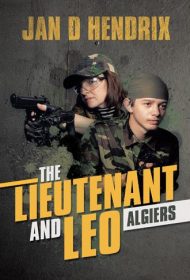 French soldiers combat terrorism in 1960 Algiers in this tale of bravery, love and loss, the third in a series.

In this time-period, France has colonial rule over Algeria, while Muslim separatists fight a guerilla war for independence. The National Liberation Front (NLF) readily uses terrorist tactics, blowing up buildings and murdering civilians. Equally violent reprisals by the pieds noirs—Europeans living in Algeria—keep the cycle going. The two main characters’ mission is to halt the bloodshed unleashed by the especially destructive assassin Aimu, who must be “caught and eliminated.”

Army Lieutenant Caitlan Dugas is an intelligence officer who requests assignment to the Algerian war zone so she can be closer to her lover, Sergeant Leo Durant. (While fraternization between an officer and enlisted ranks is usually discouraged, the two are so efficient at their jobs that their superiors are willing to overlook this.) Caitlan is “a dedicated army officer” who dresses in local civilian garb in Algiers, alert for chatter about enemy plans. In one case, she befriends a young Muslim boy in a café, partly out of kindness and partly to use him as a source of information.

Durant’s job is to find and kill Aimu. Of the enemy he says, “Their minds are twisted in a way we cannot understand…[T]he only way to deal with them is kill them” — and he does his level best.

The story is well paced and smoothly written, with tension building to a bloody confrontation and a stark aftermath. Readers will sympathize with Caitlan and Leo, fretting for their safety and rooting for their success, but they may also marvel at the mess France got itself into when it conquered people with an alien culture and language and tried to make them French.

The story would benefit from a more fully developed antagonist expressing his rationale for the terror. Nonetheless, even newcomers to the series will enjoy this intriguing historical tale, which can easily stand alone.