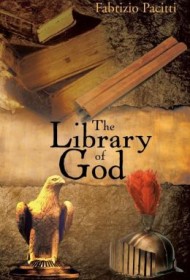 Imagine if there were a secret order of learned men who amassed great knowledge centuries ago and have passed down the legacy not only to protect this fabulous library, but also to keep it secret because the knowledge in the library is so advanced that mankind isn’t ready for it. That possibility forms the core of The Library of God.

In modern-day Rome, three unrelated strangers receive cryptic letters that lead them to a hidden underground passageway. There, they meet an elderly (225 years old) religious man who sends them on a mission to find the library and its keeper. This mission will require them to decipher codes, find hidden passages and avoid being killed by a rival sect. The ingredients are all here for a hot summer read, but the reality turns out to be a tepid stew of Nancy Drew Meets the DaVinci Code Meets Indiana Jones.

That’s because our heroine, an ex-nun named Marina, has an almost adolescent excitement to finding clues and solving riddles. Her cohorts, a police commander and an academic, are helpful at translating Latin, interpreting symbols, and summoning arcane knowledge in the nick of time. While this will hold interest for some, what’s lacking is any real suspense building; flat characters and implausible situations sabotage the tension. Readers will also wonder: If this secret sect is so smart and has so many resources, why would it rely on three amateurs to do its bidding?

The story is peppered with Latin and Italian, always translated for the benefit of readers. It’s also, unfortunately, replete with punctuation errors (“’I’d like to take credit for this but I was really just looking for a restroom.” He said.’”) And misspellings: “colonel” becomes “coronel” about halfway through the book. In the world of the face-paced mystery, these are serious speed bumps. Overall, The Library of God earns high marks for an interesting premise, but lower ones for delivering on it.