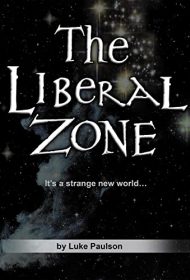 Imagine if the far-left’s “woke” agenda ruled the world. Luke Paulson conjures up just that vision in his dystopian novelette, The Liberal Zone.

Think of this story as the flip side of The Handmaid’s Tale, the dystopian television series based on Margaret Atwood’s book in which a far-right, misogynistic and Orwellian dictatorship oppresses America. In Paulson’s society, the state crushes parental rights. Gender transformation (boys turned into girls) is not just praised, but also required. Lonely voices disagreeing with the far-left’s given wisdom are suppressed. Minority thought and voices advocating for individual liberty are stifled.

Here, a homeowner who remains on the coal-powered electric grid is widely condemned for fueling global warming by “burning down rain forests.” In high irony and as punishment for his environmental crime, a mob burns down his house.

While such scenarios point out the pitfalls of far-left thinking, unfortunately, the story fails to rise to Atwood’s polished writing style. The flat narrative and dialogue don’t do justice to the passions and anger one might expect from characters who are subject to such injustices.

Additionally, the novelette form hinders those characters’ development. They deserve to be endowed with more layered qualities, as well as a stronger resolve. Are they planning revenge? Resistance? No, they come off as only as poor wretches without an overarching plan.

In each chapter, Paulson interrupts the narrative’s flow with bold-face observations about the dangers of “The Liberal Zone,” as in: ““We all know that gender is an immutable part of who a person is and cannot be changed. Impossible cannot be done even by science. However, impossible is a term that is unheard of in The Liberal Zone.” Rather than these didactic pronouncements, it would be far better to let readers reach their own conclusions.

The Liberal Zone has the makings of a fascinating story, one that many conservatives have been hoping for. However, a better written tale remains to be told.