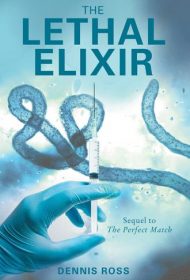 In this romantic thriller, Dr. Maggie Hamilton and FBI agent Matthew “Mack” Johnson team up to stop Chinese terrorists from destroying the country with a deadly virus.

When two patients with a mysterious disease are admitted to a Chicago hospital, infectious disease specialist Maggie is baffled by their symptoms. The patients seem to have Ebola, but neither patient has recently travelled outside the U.S., where the disease originates. Soon, it’s determined that it’s a more lethal strain of the disease. As other unrelated people become infected, the FBI is tasked with finding out who is behind the virus, and it’s a race against the clock to stop the disease and prevent a nationwide panic.

In the wake of COVID-19, Ross’ book seems more than a little anti-climactic, and it’s unclear if he wrote the book before or after the current pandemic. In Ross’s scenario, the threat is bio-terrorism, a viable concern, but from there, the plot becomes preposterous.

All but two of the affected patients are saved immediately by an experimental drug that happens to be at the ready. The FBI moves at a glacial—and low-tech—pace as Mack traipses to various Targets for information on disposable cell phones possibly used by the perpetrators. Despite the imminent threat, Mack has time for romance, love-making, and a nap. The terrorists, one of whom is pregnant and nearly ready to deliver, hide in plain sight by adding glasses, wigs and other simple disguises.

Ross’s story moves along at a rapid clip, with the exception of his dialogue. In some exchanges, the speaker pontificates or states the obvious; often, the conversation is wooden and unnatural: “ ‘Let’s go in my car,’ Jeffries replied. ‘I have lights to enable us to speed through traffic…’”

In the days before the pandemic, this thriller about bio-terrorism might have given readers pause. But considering the real-life worries of the current virus, Ross’ book is too little, too late.