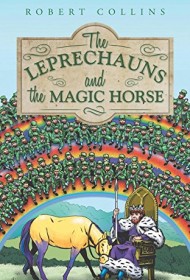 Although far more earnest than Swift’s famous satirical novel, The Leprechauns and the Magic Horse will transport readers to a world reminiscent of Gulliver’s Travels.

When he decries the Leprechaun king’s excessive boasting, royal adviser David is arrested for insulting the crown. To prove his rebuke was warranted, David asks to go into the world and find a king more powerful than his own. In return, he insists that if he’s able to find such a person, the Leprechaun king must stay in the other court for one year. The king agrees, and so must keep his word when David returns with proof of a nearby kingdom with citizens six feet tall and human, rather than six inches.

This book employs elements of fairytales and fables as well as the dry humor common in satirical fiction. The plot has trouble balancing clarity against such cleverness, however, and significant moments often go unexplained. For example, David is able to appease the human king by outing his public administrator for theft. Though the exchange between the two is enjoyable, how David came to discover this is never explained.

Compounding this issue is the story’s over-reliance on repetition, both of specific lines and situations. In one example, the Leprechauns go to the human kingdom and demand the return of their king, believing him a hostage. Each morning, the Leprechauns return with a new threat. By the fifth time, this recurring situation feels tiresome, not least because it’s unclear why the Leprechauns are so upset, having been witness to the king’s promise to remain in the human kingdom for one year.

The Leprechauns and the Magic Horse never feels truly cohesive; the stories within seem disconnected, more concerned with being clever than creating a unified whole. As such, the novella has trouble delving into its themes and their implications. Fantasy fans who can overlook these distracting issues will find a creative concept and enjoyable wit and whimsy.