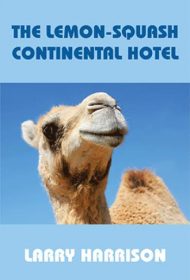 From a witches’ coven in the seedy underbelly of 1967 London to the lawless tribal regions of Afghanistan and Pakistan, The Lemon-Squash Continental Hotel covers a lot of ground in both mileage and plot.

The action centers on Guido Roberts, a hapless gambler and sometimes drug dealer who is perpetually on the verge of disaster as he careens through life on the whims of lady luck. With his love life in tatters after his girlfriend hooks up with a witch, and a local crime boss breathing down his neck, Guido is offered a fresh start—provided he takes the fall for a crime he didn’t commit. Instead, he flees to the Asian hinterlands with his ne’er do well father’s much younger girlfriend and a shadowy museum guide named Kamal in a scheme to import fur coats. What could possibly go wrong?

Harrison offers a fabulous collection of characters as he unspools his roller-coaster yarn. But he missed the enormous opportunity to develop them. Guido, neither fully good nor bad, obviously has a complicated relationship with his father that’s aching to be explored. His father’s paramour, Chantelle, a petty thief who may or may not be falling for Guido, is another missed opportunity. She’s feisty in her confrontation with a bully on a bus trip, but more often a mere place holder as the action speeds ahead. There are also many unanswered questions about purloined art that appears inside Guido’s luggage.

The subtext is, apparently, that life is often out of our control, be it the results of a horse race or the curse of a witch you’ve irritated. But while the pieces are there, Harrison – an imaginative storyteller – fails to connect the dots. The early section about his encounters with a feminist cadre of witches feels oddly lurid and irrelevant to the later adventures in the Afghan desert and with stolen antiquities.

This is a quick, fun read. But it could have been so much more.