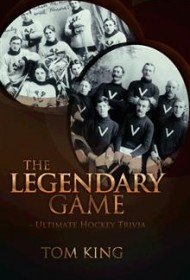 Hockey fans will simply love The Legendary Game by Tom King, who has been researching the sport for 35 years. His hard work shows. The book of hockey trivia carries an incredible amount of information in its easily organized 29 chapters.

While it covers the topics and stars you would expect to read about (the original six teams, for example, and Gordie Howie, Wayne Gretzky, et al), it goes far beyond the commonplace. Indeed, there are chapters about the sport’s professional origins, its minor leagues, the International Ice Hockey Federation, families that played in the NHL and hockey players who excelled in other sports as well.

King offers a combination of narrative, trivia questions and answers, and a generous “Did You Know” section to conclude each chapter. Here’s a sampling of the trivia:

This lifelong New York Rangers fan especially enjoyed reading about the team’s origins and the role of such legendary names as Conn Smythe, Lester Patrick, Frank Boucher, and Bill and Bun Cook.

With this book, King shoots. And he scores.