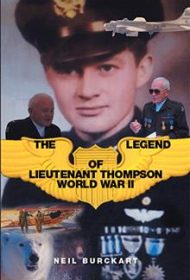 While Thompson isn’t credited with authorship, he has written parts of the book along with  Neil Burckart, an old hunting buddy. Their voices alternate somewhat randomly throughout as they offer two quite different but equally riveting lives here: Thompson the bomber pilot and decorated WWII hero; and Thompson the gutsy entrepreneur who enjoyed success as a commercial salmon fisherman and hunting guide.

Thompson flew 30 wartime missions from England into Germany and France and was awarded two Purple Hearts and two Distinguished Flying Crosses, all before his 23rd birthday. The book’s first part could have been ripped straight from his diary, with almost daily accounts of briefings, targets, enemy resistance, successes and failures. Thompson’s matter-of-fact account is spellbinding, and as with most other memories of those sad,  dangerous days, the senseless loss of life is ever-present: “We lost … a total of eighty men, almost exclusively to flak. There were lots of empty bunks that night.”

After the war, Thompson’s reputation as a hunting guide in Alaska and, later, in Africa attracted world-wide clients, many of whom left with record-breaking trophies. His near-fatal brushes with everything from rampaging elephants to the brutal Alaskan winter are told in gripping high definition: Wounded polar bears that charged the hunters were sometimes stopped only a few feet away; once, Thompson warily poked the nose of a fallen bear with the barrel of his now-empty rifle. Red-blooded hunters will love these tales; more liberal-minded conservationists, mindful of how many of the hunted animals are now endangered, will likely be appalled.

The author’s different voices can be confusing initially, but readers will soon adapt to the style. And while spelling, grammar and punctuation mistakes can be distracting, these are minor blemishes. Overall, this is a remarkable story.