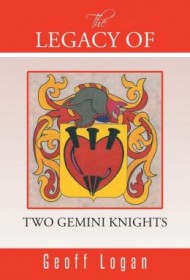 In The Legacy of Two Gemini Knights, Geoff Logan invites readers to partake in a new version of the ubiquitous Templar treasure legend. His novel highlights all the traditional conceits of the genre, including symbolic artifacts, mystical lineages, holy sites and obsessive Catholic villains.

What sets this novel apart from the others is that it takes place entirely in the Middle Ages. The story begins 13 years after the Templars were disbanded, and, rather than depicting a modern hero’s struggle to decipher ancient mysteries, narrates the somewhat puzzled cogitations of someone living in the afterwash of their time.

The protagonist, William McBride, begins his journey into manhood as a squire to one of the few remaining Templar knights. He soon makes a grievous error, however, and spends a significant portion of his life looking for, and then fulfilling the stringent requirements of a second chance. Along the way, he takes on the responsibility for the miraculous figure of a black Madonna, a ring with magical properties, and a rag doll capable of influencing thought. William’s ultimate goal, which the artifacts and Templar treasure are intended to enable, is the eventual building of a new temple in Jerusalem.

During his quest, William encounters several mentors. Their kindly advice serves not only to aid William, but also to ground a convoluted plot that sometimes strains the suspension of disbelief. For instance, William’s Templar wishes to travel to Jerusalem to find a nail forged to crucify Christ —a task that would strain the credulity of most readers.

The book is also marred by typos, malapropisms and tense agreement problems. In addition, the author employs phrases such as “life style” and “comfort zone” which, because of their incongruity with the Middle Ages, jar the reader’s absorption in the narrative line.

While The Legacy of Two Gemini Knights offers some moments of intrigue, it requires more thorough editing before it can successfully compete with others of its genre.