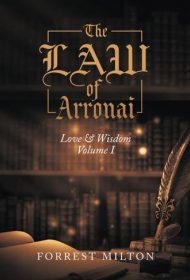 In the foreword to his novel, The LAW of Arronai, Forrest Milton offers a tribute to J.R.R. Tolkien. Indeed, with its grandiose language and larger-than-life characters and settings, his book strives for similar scope. While Tolkien stuck to fictional worlds, however, Milton weaves in cues from Western medieval history to tell his story of a struggle between forces of good and evil.

The realm of Sherrandon, ruled by King Phillip Arronais, is a paragon of peace, civilization and harmony. Arronais is the latest among many sage rulers who’ve protected the kingdom from evil, including the wicked Shetani, humanity’s “arch nemesis,” who was banished from the realm generations before.

Arronais’ subjects include the prototypes of any good fantasy – from warriors to grooms to blacksmiths – and Milton’s imagined world offers echoes of Tolkien. The Gilmenids, for example, resemble Hobbits down to their tiny homes and wooden pipes.

Yet the story, set in 1290 C.E., also includes references to the Pope and other historical elements from Catholicism. King Arronais and his forebears have devoted themselves to the protection and translation of The Book of Love and Wisdom, or the Book of LAW, which is clearly the Christian bible. Meanwhile, Shetani is determined to return from exile and eradicate this text, the realm’s important moral compass.

While Milton’s efforts to create an epic narrative style are usually effective, sometimes his commitment to a complex vocabulary impedes the action (“Blazing through an orifice in the clouds, the sun streamed a blinding radiance into Oscar’s face”).

But the story’s real stumbling block is in the author’s marriage of fantasy and real religion. The abundance of Biblical passages and unvarnished devotionals are jarring juxtaposed with fantastical elements. They also make the book feel less like an exercise in escapism than proselytization. This is likely to deter many readers.