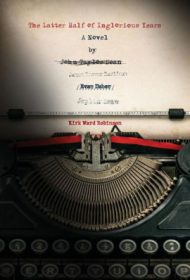 Kirk Ward Robinson’s clever novel The Latter Half of Inglorious Years tells the story of a writer and his secrets.

Joplin Dean is a mediocre blogger who reconnects with his sister after his father John dies saving a child’s life. While going through his father’s belongings, he discovers a manuscript, The Latter Half of Inglorious Years. John was a self-published novelist; now Joplin’s sister finds a publisher for John’s short stories— and becomes a literary and media sensation. Meanwhile, Joplin does something with the manuscript that changes his life. While enduring the ramifications of his act, Joplin and his sister slowly discover the personal meaning behind their father’s work.

The novel captures readers’ attentions in several ways. Joplin tells his story to a bartender and drinking companion while hiding out on the island of Nevis, interspersing revealing details with charming descriptions of the island and the friends he makes. The book also contains long excerpts from John’s novel— both manuscript and published versions—which gradually build suspense and the sense of approaching tragedy.

Joplin is a fascinatingly complex character, not likable, but understandable and perhaps even sympathetic by novel’s end. Joplin resented John for disapproving of his blog, and feels anger towards his sister for her newfound success. For a writer, his revenge is terrible, not to mention deeply unethical. He fails to understand the meaning behind his father’s novel until it’s too late.

The literary technique behind the narrator of John’s novel, while inventive, can be difficult to understand. Indeed, Joplin’s audience—the bartender and drinking friend—need him to explain it. Also, with scenes from both versions of the novel shown, remembering the differences between them can be challenging. Additionally, it’s briefly unclear if the beginning of one scene is set in Nevis or the past.

Those issues aside, the novel presents an intriguing premise that’s skillfully developed. Throughout, Robinson offers readers much to think about concerning literary inspiration and the complexities of family.