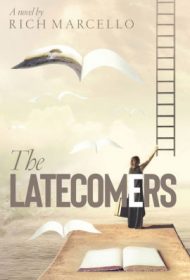 In Rich Marcello’s novel, The Latecomers, Charlie and Maggie Latecomer grapple with growing older, building community and decoding a manuscript that could change the fortunes of humankind.

At 55 and 60, respectively, Maggie and Charlie have both been recently let go from lucrative jobs. Maggie’s second career as an artist keeps her busy, but Charlie is growing restless. On his birthday, he announces to Maggie that he’s leaving for their vacation home in Nova Scotia – without Maggie.

Enraged, Maggie falls into the arms of a younger start-up maven who adores her paintings. Charlie joins a spiritual retreat and he, too, finds a younger partner. When a violent event upends the retreat group, the Latecomers’ lives take a mysterious turn.

In the wake of the devastation, a friend of the retreat’s leader gives Charlie a mysterious book filled with runes and figures. Decoding its pages, Charlie, Maggie and others discover that a rare plant may hold the key to improving human well-being. As a pharmaceutical company is also on the trail of the plant, and its CEO will take drastic measures to keep the plant’s benefits under her control, Charlie and Maggie must determine how hard to fight, and how much to sacrifice, to unleash the plant’s near-miraculous properties.

The story, which revolves around an esoteric truth involving Norse deities, may remind readers of Ishmael or Sophie’s World. Marcello delivers memorable characters in Maggie and Charlie. Compelling and realistic, both are passionate idealists who sometimes succumb to less admirable feelings. Their bond is believable and touching, especially toward the novel’s poignant conclusion.

Two minor flaws distract: Introducing the runic manuscript earlier, instead of halfway through, would improve pacing; and the writing, mostly artful and compelling, occasionally suffers from self-indulgence, as when Marcello describes meals in detail that, though mouth-watering, seem non-essential to the story.

Despite these issues, The Latecomers is a rousing emotional adventure story that should appeal to readers of literary novels with big ideas.