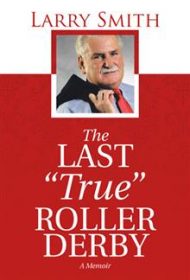 A skater who was in the thick of the Roller Derby during its heyday in the 1960s and ‘70s shares inside experiences in his memoir, The Last “True” Roller Derby.

Larry Smith, who was born to poor California farm workers, had wanted to join the Roller Derby since his youth. After graduating from high school in 1963, he attended Derby training school in Oakland. Within two years, he was named Rookie of the Year while skating for the Chicago Pioneers. He also competed to sell-out crowds for the San Francisco Bay Bombers, the Oakland Bay Area Bombers and the Ohio Jolters teams.

Smith loved the competition and camaraderie, even though the pay was low ($65 a week, with a $15 a week food allowance) and the five months of travel between cities grueling. Skaters worked for 17 days straight, driving 500 to 700 miles nightly. The book includes not only skating highlights, but behind-the-scenes drinking, brawls, occasional trouble, and entertaining times the skaters shared.

The derby games are presented as serious and physically taxing, involving fights, intense skating and rowdy fans. Over the years, Smith suffered concussions and a broken nose, broken knuckles and teeth—and more. And while Caucasian, African-American and gay skaters always got along well, they encountered disturbing prejudices, especially in the deep South.

The author makes clear from the start that his book of journal-like writing comes from memory and he may have gotten some names and dates wrong. It also is organized in a disjointed manner, sometimes jumping between time periods and sometimes revisiting stories. A more organized presentation would have enhanced this offering.

Nonetheless, this is a sincerely penned book that may appeal to long-time fans because of its honesty, its tribute to and details on some of the Roller Derby greats, and its insight into life beyond the skating rink.